Anna's report: My trip to Lourdes

In the very early morning when even the birds are sleeping we were already at the airport.
We met with Balázs and Lilla, checked in and said goodbye to the boys (Father and Balázs). Lilla and me already experienced flying with a plane however it was the first time for my mother, so she felt quite sick, she didní1t even eat, although the food was really delicious.

After a two hour flight we arrived to Paris. We had to travel to another airport. We missed the bus which came every half an hour so when we arrived to the airport we were already late for the check in, but thanks to Lilla who spoke with the French they let us on the plane.

When we woke up we saw the sea under us. It was wonderful! When we get off a pack of palm trees and Chantall were waiting for us. We get in her car and she took us to our hotel for that day.

Before we got used to our new place we went on to the St. Paul church, where a lot of people already waited for us with cameras. After the interviews and pictures we were finally able to get inside to see the altar.
The mass was really different than what we see in Hungary. The priests, the alter-servers, and even the people were more direct. The altar was much closer to the audience, the inner place was not that monumental, but we felt more closer to God like this. In the church there were a cross which they brought back from the bones and artifacts of St. Philomena a while ago. This is the biggest relic of the church which is on the altar for the whole mass, and after it all the believers can kiss it. The people of Perpignan pray for this cross, and through this to St.Philomena.
I was the first pilgrim here, which was a really great honor for me.

The first room of our first night was a bit smoky, so within 5 minutes we changed a whole floor to reach our new rooms.
After the switching of rooms we were invited to a dinner by the Femmes Internationales Murs Brisés. There we got to know a lot of kind people.

At half past ten, for our request they took us to the sea side.
Ours was the only footprint on the shore till the great waves of the sea. This was my first time seeing the sea. We were running in the sand like small kids with Lilla towards the shores and the only thing that stopped us was the fact that Lilla fell over while running. :)
We trod on the waves for a while, we draw pictures in the sand, but after a while Mother became impatient and we had to leave, but I really would like to see the dawn here...

On Saturday morning we started out with an empty stomach.

After 5 hours of travel between mountains, forests and water we finally arrived to Lourdes. Jérome and Magali brought the bigger bags with car after us. When we meet at the station in Lourdes they took us to our lodgement which looked like a sanatorium or a hospital, but it was visited by none other than Pope Jean-Paul 2nd in 2003. This was the closest place to the shrine.

In the city there was a Military Meeting too. Those units participated here who has to go to war soon however desires peace. We meet with Hungarian soldiers too who went through the Cross's Way, with a big cross on their back in respect for Jesus.

After a few minutes wait in a queue we were able to drink from the healing water thanks to the approximately 30 taps and the patience of the people there. After this we lighted a candle for those loved people in the family who has also some kind of illness. Later we discovered the other parts of the shrine and went to see some bazaars.

At night we had dinner with the Spanish delegation and nuns and then went to sleep.

Today the rain was falling nearly for the whole day, however this was not able to stop us from visiting the cave where St. Bernadette first saw the Virgin Mary, and where the spring starts.

Sadly we weren't able to bath in the spring because we should have wait around two hours in the cold and we didn't want to catch a cold. We squeezed ourselves into the basilica which was full with people, and after we have a look we get out with the lead of Jérome.
To tell the truth Mother was a bit late because of the bags she was carrying. We went on to see the other chapel. I can't even describe with word the beauty of these places. Then we wanted to go the an English mass from 11 however it turned out that a pack of people reserved it for themselves, so in the end we went back to have lunch.
There we had a guest. A priest from the basilica, who told lots of tales about St. Bernadette. We may think that they were friends if we do not know that there are 150 years between them. After the filling lunch we went to see the house of Bernadette. It was a small place called a Chapot (it means dungeon).

I got a statue of St. Philomena from Jérome. Magali and Jérome also surprised me with a "tenth ring". Even without this we were already really grateful for them. We suprised Lilla with a small heart shaped keychain and also get some souvenirs for our family.

Early in Tuesday morning we were having breakfast and then hurried to the car. With hard hearts we have a last sight on the beautiful surrounding that we should leave behind soon.

We said goodbye to our guides at the train station and then we started again a 7 hours traveling. It goes without saying but the first class of TGV still much more better than the Hungarian trains, so Go on Hungarians! :)))

We started to stretch ourselves by a quick shopping for french cheese for the father of Lilla, we had an idea. Why not visit the Eiffel tower in our remaining time here?
We didn't have the time to climb it but we made some pictures and bought some small Eiffel towers. :) After some traveling with metro in Paris we finally arrived to the airport.

We have arrived to Hungary around 11 at night. There my Father and Sister and Balázs waited for us. Everyone hung to the neck of one other and then we said goodbye to each other, and went home.


But we still know: We won't ever forget each other!

We would like to thank sincerely the leaders and members of the Associaton Femmes International Murs Brisés, who has done everything possible to realise Anna's wish.

Bence's days and nights are about LEGO. It was obvious that he asked from Csodalámpa to visit LEGOLAND.

As we heard Bence did not believe that his wish would come true, but as the car arrived on Friday morning he asked with bright eyes

- When shall we start at last?

The journey was exciting. Bence ate well at our first stop at the McDonalds in Bábolna. Getting know that Bence never saw a real airplane we went to the airport of Schwechat (Austria) after crossing the border where we did not see lots of planes but the construction site was very interesting.

The journey took a whole day but Bence didn't care as we offered him lots of snacks and drinks. Moreover he received small presents like books, colour pencils and soft toys not to get bored on the trip. As there was a DVD player in the car we watched Sponge Bob and Vuk.

On Saturday morning Bence was our alarm clock asking the time when we get started from 6 o'clock every 5 minutes. We explained him many times that Legoland opened only at 10 o'clock and we would be there on time.

Well... we were the first who arrived. We did not know what to do first whether we should see the mini cities or the harbour or better to try some other attractions?

We decided to start from the beginning and go on one by one as we were going to stay for the whole day.

The pictures should tell you more about how much Bence enjoyed the trip:


Before closing we visited the LEGO shop.
It wasn't easy to decide which LEGO to choose. Bence was really happy and running with his new toys when though we could hardly walk from tiredness. Bence suddenly got sad in the car just before leaving:

- I forgot the most important - Indiana Jones!

The park was already closed and everyone else would have started to convince Bence that it was not a big deal, next time... but not us.

It's a fact that Legoland was already closed. But it wasn't a problem for us. We jumped out from a car, run to see a German lady at the gate and convinced her within 1 minute to open the gates and to help us to make a wish come true. Bence counts on her, on us. We got through the gate and we rushed into the shop and we succeeded! We even got an Indiana Jones key holder!

It was easier to go out. The barriers opened and we could slowly walk out, catching our breath.
You should have seen Bence's face!

At the hotel we thought he would fall sleep immediately. But no... We had some rest while he was assembling his newest LEGO toy. He slept with Indiana Jones and they became really good friends.

Sunday morning it was Bence again who woke us up. We thought to give him a suprise as it was Children's day in Hungary.
In LEGOLAND Bence loved the castle of Neuschwanstein, which was built by 6 men during 6 months from 300.000 LEGO pieces. So we took him to the real castle on the way home. 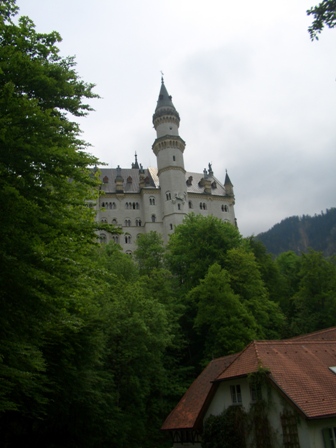 We took a ride up to the castle in a horsecart. We visited lots of rooms and we listened to the history of the castle of Luis the 2nd (called also Louis the Fool).
This castle looks exactly the same as the one at the beginning of the Walt Disney films with lots of towers.

On the way home Bence was happily playing and talking about his adventure. He only missed the rollercoaster, but we are going to have a ride on it in Hungary someday.

At end he said: "Thank you a lot for bringing me here" and he gave us a hug. We only could thank him for bringing us here.

We would like to say thank to the students of The American International School of Budapest, Pappas Auto Magyarország Kft-nek and the team of Legoland in Grünzburg (Germany) for helping us to make this wish come true.